Home » Simply Personal » When I Woke Up This Morning…

When I woke up very suddenly this morning… with the distinct feeling that something had woken me up… the room was lighting up at intervals from lights that were moving around just outside our house. The lights were too low to be lightning and not in the right place to be coming from cars driving past in the road. When I got up and went to the window, I saw two large round lights slowly moving back and forth, covering first one section of our yard and then another. It was still early, only a few minutes before four a.m., and it was still completely dark outside… no street lights here!… and all I could see was the lights. It was very obvious that the lights were not flashlights because the light was so intense and yet so strangely muted at the same time… and that at least two people were near our house doing something they shouldn’t be doing. 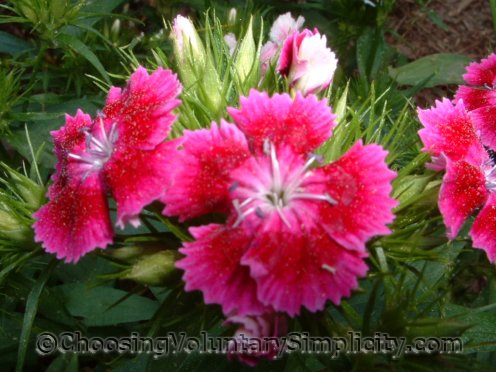 At this point it seemed like a good idea to make whoever was out there aware that someone knew they were there, and I knew opening the window would do the trick. This particular window always makes a horrible shuddering, screeching sound when it is opened quickly and with force, and this morning in the darkness I made sure opening that window made a LOT of noise. The lights suddenly stopped sweeping the area and froze in place. By this time my husband, who is a very heavy sleeper, had joined me at the window and wanted to know what was going on… but as soon as he saw the lights, he knew. It is always difficult to know what to do in a situation like this. Obviously it is illegal to use a spotlight to hunt at night on someone else’s property… and especially so near a house. On the other hand, we didn’t really want a confrontation.

So I leaned out the window and started loudly calling over and over again to an imaginary dog, the way anyone would do if a dog had just gone outside and was a little slow in coming back in. Our two little dogs (in the room with us) started to bark frantically, as I had known they would, and the people with the lights took off. It was still too dark for these people to see without their lights, and too dark for us to see anything except their lights… but we were glad to see both lights moving at a very fast run out of our yard, into the road, and then up the road until they were completely out of sight. Someone… or two someones, I guess… couldn’t get away from here fast enough.

So how did YOUR morning start?

For One of Us It Is a Totally Relaxing Experience

Seriously, you should check around to make sure the spotlight hunters haven’t left a salt lick as bait somewhere on your property.

And notify a warden just so they have it on record. They won’t be able to do a thing, but if you have any other “visitors” the warden service might just take this seriously.

This is a dangerous time for people who live in rural areas and for farmers, also with cows and horses to protect. Take care Shirley. Lots of people out of work looking for free food on the hoof.

Scary! I hope that scares them off for good – and they pass the word around about your big ferocious dog :)

That must have been very scary. You were clever to start calling your “dog” — that delivered the message without you having to confront someone who already knew they were committing a crime. I’m not sure what I would have done in the same situation.

And to answer your question, my morning started when I got up, took a shower, and had breakfast and a cup of coffee. Nothing quite so exciting as yours!

I agree with the first commenter, keep a close eye on your animals. We lost a calf because someone thought it was a deer. BTW that was great presence of mind to call your dog.

The nerve of some people. We live in a rural area too and I have the fear of something like that happening around here. Its so darn dark at night you can’t see your hand in front of your face. I agree… I would let the game warden know what’s going on in your area.

We had a similar thing happen to us twice; once it was the cops (which wasn’t obvious from our window) looking for a home invader, another time it was a search group looking for a young, developmentally disabled kid who was missing.

Scared the heck out of us both times, and instead of being smart like you, we went out to find out what was going on.

If you haven’t done so already, I encourage you to call the cops. Assuming these two were just poaching is foolish, they could be up to even more devious things.

The morning we woke up to the police in the yard, was a few hours after I noticed a strange car parked in front of our across street neighbors, I didn’t call the police and he snuck around our property and broke into a woman’s house 1/2 mile away or so. Which is why I hope you at least file a report on this.

Hope the rest of your day was uneventful.

Scary! You were a little braver than I……..I’d be afraid they would shoot!

I woke up with a migraine and a sweet husband who took care of the kids. A good friend found your blog for me while finding me answers to help with my allergies. Needless to say, I am thanking God for you and the wisdom you have of someone who has “gone before” me on this road. I have felt so alone and powerless…and then I am reminded that God is with me in the journey! Thanks for giving us a sense of hope!
And best wishes to keep the prowlers away!

20-30 years ago when things were a little more ‘informal’ in these parts….we use to have trouble with coon hunters late at night. We don’t any more. I don’t know if it’s changing times or perhaps my Letter to the Editor stating the whole world is NOT their oyster. LOL

Maybe somebody hunting for magic mushrooms?

And how did my morning start? With a root canal! My dentist likes to do them early in his day.

My morning started as it always does, with the cats demanding their breakfast. Now, if you please.