I’m always interested in the history behind an item, and over the past couple of years I’ve been collecting information about Hazel Atlas jam jars. I have been able to find radio commercials, newspaper and magazine advertisements that describe the Kix cereal promotions in detail and definitively date the apple and strawberry to 1940 and 1941, respectively. I still have not found any advertising for the pineapple.

Some of the advertisements and commercials call these jars “English breakfast marmalade jars.” A radio commercial from the April 7, 1940 episode of Beat the Band describes how the apple jam jar promotion worked:

“Folks, there’s still a chance to get one of those swell English breakfast marmalade jars now being offered by the Kix people at your grocer’s. But you mustn’t wait any longer. Throughout the country they’ve been going like hotcakes. In fact, many grocers are completely out already. Don’t miss out on getting this swell little jar, will you? It’s shaped exactly like a real ripe red apple, and it’s colored like an apple, too, in a gorgeous bright red and a gay sparkling yellow. And it costs you only one single penny with your purchase of Kix. That is, two packages of Kix. You can’t beat a bargain like that, can you? An American-made English breakfast marmalade jar for only one single penny with your purchase of two packages of one of the most delicious ready-to-eat cereals you have ever tasted. See your grocer tomorrow morning without fail while there’s still time.” 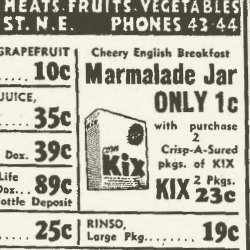 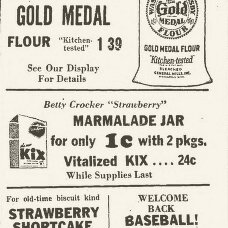 I have noticed that in all of the 1940 ads the jars are described as “cheery English breakfast marmalade jar.” By 1941, the wording had changed to “Betty Crocker strawberry marmalade jar.” The details of the promotion remain the same… one jar for one cent with the purchase of two boxes of Kix cereal. 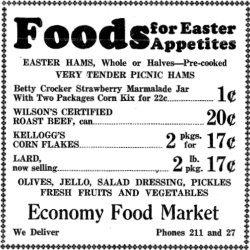 The magazine advertisements featured an actual-sized drawing of the apple or strawberry… the apples were featured in 1940 advertisements and the strawberries in 1941. Is it possible that a pineapple promotion was planned for 1942 and never happened because of the start of World War II? Could that be why so little information has been found about the pineapples and why so few of them exist today? 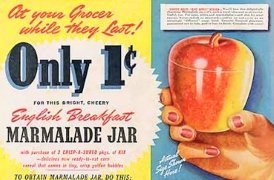 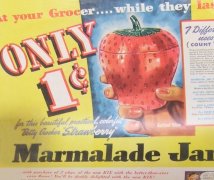 You have probably seen Hazel Atlas jam jars described as sugar bowls, pudding dishes, or tiny soup cups. I was surprised to discover that all of these uses and more were actually suggested by the Betty Crocker home economics staff in the 1941 Kix cereal promotion:

Drop everything and run to your grocer’s before they’re all gone! Made from durable Carnival-ware, shaped like a luscious strawberry. One of the most attractive novelties you’ve ever seen. Inside it’s brilliant white. Just the thing to enliven your table. The Betty Crocker home economics staff at Minneapolis has tested it. Guaranteed not to fade or lose the finish. Use it for:

MUSTARD, HORSE-RADISH
It’s out of the ordinary

CUSTARD or PUDDING DISH
Appeals to any child!

SOUP or CONSOMME
You’ll say “What a good idea!”

As a SUGAR BOWL
Give a gay touch to your table

As a NOVELTY CUP

That radio ad is wonderful! Don’t you just love the phrasing and the way the radio guy presented this ad? I’m old enough to remember when radio was like this, not quite as antique as the Hazel Atlas jam jars, but getting there. Thank you for all your hard work on this wonderful site. I’ve been reading here almost since you began but this is my first comment.

This information is just what I’ve been looking for but haven’t been able to find. I’ve seen sellers describing these jars as even being from the 1960s, right in there with the ones exactly like them being described as from the 1930s. I appreciate seeing the actual ads and this opportunity to accurately date the two jars I have.

A great post as usual. I’m fascinated by these colorful jars and the other items this company made. When we went through my mother’s things we discovered she had so many dishes made by this company. Your information has been a much appreciated find.