I sow the hosta seeds in quart-sized plastic plant pots, hopefully labeled and one variety to a pot. For soil, I use a bagged potting mix for seedlings because it has given me better results than any of the other starting mixes I have tried. I fill each pot nearly full with potting mix and press it down lightly. Then I scatter seeds over the top, add another sprinkling of potting mix to cover the seeds, and place the soil-filled pots in trays of water until the soil surface is thoroughly damp. I let each pot drain for several minutes, seal it in a large plastic bag, and put it a warmish place. I check the pots every few days for signs of germination, and usually within two weeks there will be some seedlings starting to pop up out of the soil. At this point I remove the plastic bag and place the pots with the seedlings under lights for about ten to twelve hours each day.

When the seedlings have developed a few leaves, I transplant each one into a small two ounce cup and then after further growth, into a four ounce cup. I have found that inexpensive plastic cups are great for this, especially the transparent cups that show how the roots are developing. I disinfect and re-use the same cups year after year. Eventually I transplant the seedlings into one quart plastic pots, which are large enough to accommodate the seedling until it is transplanted outside in the spring. Hosta seedlings thrive on frequent transplanting. I use fresh potting soil each time I transplant (in the spring I add the “used” soil to the gardens outside). I bottom water only, so all my transplanting cups and pots have holes in the bottoms. 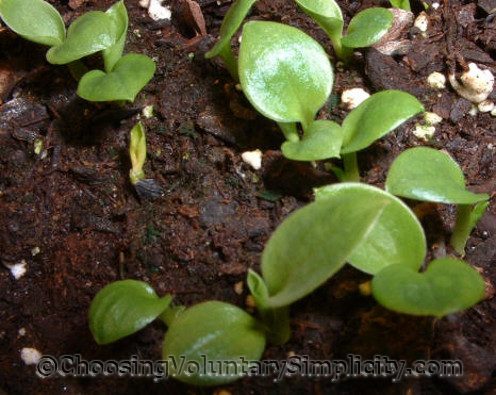 Not every hosta produces seed pods. Some hostas produce huge numbers of pods and seeds… others produce pods but very few seeds, and sometimes seeds are not viable and will not germinate. I have found that germination is often poor with purchased seeds, but the germination rate for seeds I collect from my own hostas is astonishingly high. Hosta seeds are ready to be harvested when the seeds have turned black, and for me, the best time to start seedlings is sometime in January. By the time I transplant them outside in late May, the seedlings will have a large, well-developed root system. Many will have already produced blossoms. 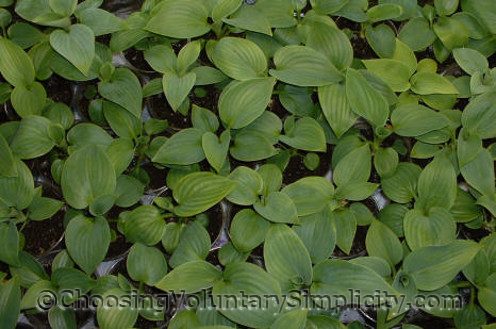 The differences between the hostas I collect seed from and the hostas I grow from that seed are amazing. For example, I now have several tiny miniatures that came from seed I collected from large hostas. Leaf color, leaf shape, and leaf texture will also vary tremendously from the parent hosta and from seedling to seedling, even though they may start out looking pretty much alike. Although it is true that most of the hostas grown from seed will be a solid color, that doesn’t always happen. Some of my earliest seedlings from solid color parents are now showing blue or gold edges. When seeds from streaked hostas are planted, some of the seedlings should be streaked, but many will be a solid color. Some of these will develop streaks… other seedlings will start out as streaked and mature into a solid color. 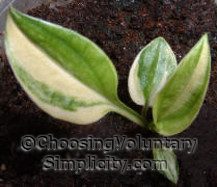 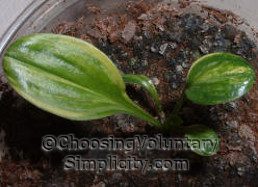 I never cull any of my hosta seedlings… partly because culling goes against my philosophy, and partly because a seedling that doesn’t look very promising at a few months or a year old will often turn into a beauty. One of my earlier seedlings in particular looked very ordinary for its first few years. This year its leaves are very twisted and almost black, and are so thick and tough they look and feel like shiny, heavy vinyl. It is really a quite spectacular plant… one I would not have if that rather ugly seedling had been culled. That is what I enjoy so much about growing hostas from seeds… you never really know what the results will be.

I picked the seeds when green, are they still good??

At the end of the growing season the seed pods can still be green and there can be ripe seeds inside. However, this early in the season I doubt very much that there will be any ripe seeds inside your green pods. You can tell by opening one of the pods. If the seeds are only partly formed and white, they will not germinate. When the seeds mature, they will be black.

Does hosta seeds need any form of stratification?

Jeffrey, I have had great results without stratification. I just dry the pods and plant the seeds… but if I’m going to keep the seeds for any length of time, I do store them in a glass jar in the freezer.

Some of my hostas produced loads of seed pods this year. They are still green but I’ll keep an eye on them. Thanks for all of the great tips!

I was very glad to read this as one of my favorite hostas outside produced seed pods and I was hoping I could plant and grow from them. I know the offspring probably will not have the same beautiful blue color as their parents, but I’m hoping for some nice plants regardless!

Hi! I noticed you have a lot of posts regarding hostas…. I really want to plant a garden this year, and would like to try my hand at hostas. Do you have a recommended place to start? Should I look online to find a place to order the hosta seeds, or would you recommend a local nursery? I live in CA, and have OSH, Lowe’s, and a Capital Nursery nearby. Thank you!

Rhonda, I would recommend starting with hosta plants, not seeds. I have not been happy with purchased hosta seeds. This is just my own experience, of course, but any purchased hosta seeds I have tried have had an almost nonexistent germination rate. If you decide you want to try seeds later, you will have much better results with germination with your own collected seeds. Also, since hostas are hybrids, you cannot grow a hosta from seed that is the same as the parent plant.

You will be able to find hosta plants at any nursery or even the stores like Lowe’s and Home Depot, and the small hostas are quite inexpensive. Be very careful to examine the plants before you buy, though. Many areas have a huge problem with the hosta virus, and one infected plant can spread the virus to other hostas quite easily. The hosta virus is something you really want to avoid.

Love your website. I can’t wait until next year to try my hand at germinating my hosta seeds. I have a serious problem with rabbits and my hostas. By mid-August, my hostas are no longer. I have tried everything out there. any suggestions? Thank you.

I cannot wait to try this propagation method for hostas! I’ve divided before, but voles and moles have eaten almost all of mine up – will have to start with a new fresh batch this year, unfortunately! There’s nothing nicer than healthy hostas to compliment all the color I’ve got going on in my garden – it allows the eyesa place to rest.
Can’t wait to try growing hostas from seed!!!!

Hi, Shirley! Thanks for the page. Today I just picked pods from 5 or 6 varieties of hostas (with permission!), and I was wondering what the best seeding procedure would be. In the past I’ve had some success just direct-seeding into the ground outside, but I’m sure that I’ll have much higher rates of germination, then of mature plants, by pampering the seeds and seedlings like you recommend.