Just Passing Through… We Hope!

Almost as soon as the ice and snow melted off our small pond this spring, we noticed that the pond’s usual crystal clear water was now always slightly muddy.

At first we thought that the extreme temperature fluctuations this area was still experiencing had perhaps disrupted the pond’s natural ecosystem. Then we started seeing turtle heads sticking out of the water or a small turtle basking in the sun on a rock or in the grass at the side of the pond. Their shells were often covered with algae and clay. Now we knew what was making the water muddy… turtles digging into the soft clay at the bottom of the pond.

These turtles were small with shells ranging in length from just over three to nearly four inches. Adult musk turtles are that small, but so are young snapping turtles, and from a distance they can look very much alike. I needed a really close look to be able to tell the difference, so one day I just walked over to one of the turtles and picked it up. 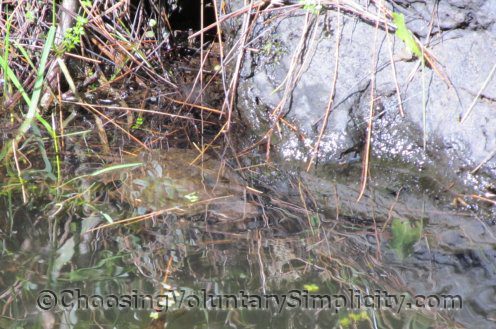 It had a tiny plastron, ridges on its long tail and jagged edges at the rear of its shell. Our cute little turtles were definitely snappers. 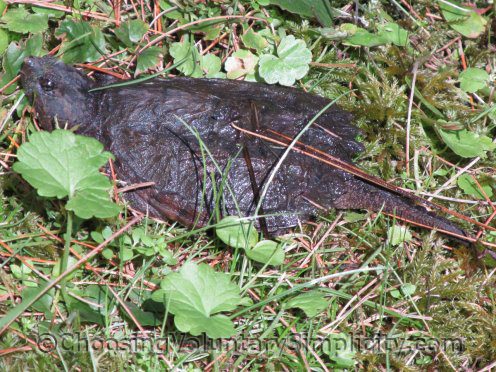 I have seen only one adult snapping turtle, and that was several years ago… a huge turtle sitting in the middle of a busy road several miles from our house. I have a long history of moving turtles out of roads, so this day I stopped the car and my mother and I got out and approached the turtle. I have since seen New England snapping turtles described as being larger than manhole covers and weighing more than forty pounds. This turtle was definitely much larger and heavier than that… closer to the size of the big tortoises you see in a zoo. We had each picked up a large stick that we intended to use to herd the turtle to a safer place but the turtle didn’t appreciate our good intentions. Luckily we were both still a safe distance away when the turtle gave a big lunge and bit completely through the stick my mother was holding. That was when we discovered that with the right motivation snapping turtles can move very, very fast. Luckily… so could we! It was hard going for all of us, but we eventually got the turtle moved off the road but still heading in the same direction. It was not an experience I would choose to repeat. 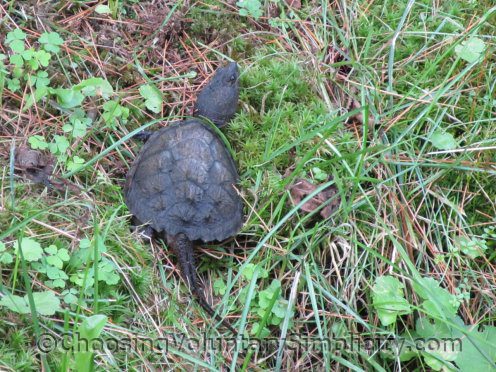 Which explains why I wasn’t very happy when I realized that we had snapping turtles in our pond. Although they were small now and awfully cute… fun to watch and not at all snappy, I kept wondering what we would do if the turtles stayed in our pond and grew and grew… and grew. 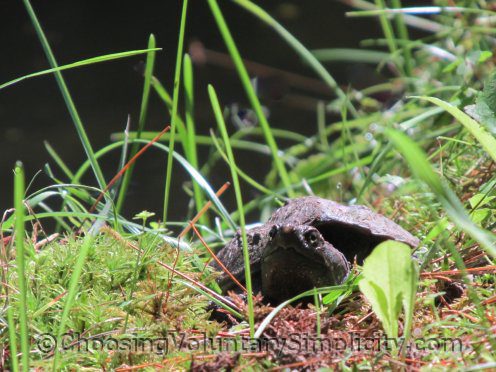 And then one day in early fall the turtles were suddenly not there anymore. The water cleared up and stayed clear and we stopped seeing turtles every time we went near the pond. Or were we just not seeing the turtles anymore because the turtles were buried in the foot or so of soft clay that is the bottom of the pond? Will we see these turtles again in years to come when they’re seventy five pound adults with enough strength in their jaws to bite off a finger? 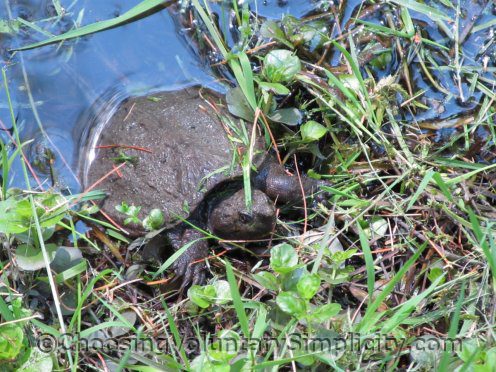 I’ve encouraged numerous snapping turtles across roadways, and here’s the easiest, safest, quickest method I’ve ever seen. I learned it from another woman who had stopped when I did to shift a large snapper across a busy roadway. I keep a solid-colored plastic storage container (like the recycling boxes everyone seems to have) in the back of my car. If you put the box on the ground behind the turtle several feet away and then start moving it toward the turtle, the turtle moves away from it. (As you already know, this is the toughest thing to get a snapper to do!) The box method is AMAZING. My guess is that somewhere in the turtle’s brain it interprets this advancing dark maw as a giant open mouth, bent on a turtle dinner. Anyway, it works! You can even use a stick to shuffle the box forward in a side-to-side motion, if you don’t want to get closer to the turtle.

Our German shepherd had an unfortunate encounter with one of those giant snapping turtles and it lost the fight. The big ones *are* something else. It’s a good idea to keep a distance.

As always – wonderful photo’s! You have a really great blog here. I’m a regular reader.