The Mister & the Missus

The Mister and the Missus stand on top of my refrigerator, and they have been a part of my kitchen for many years. I think having a few non-functional treasures like these around adds warmth and character to any room, and I especially like these figures because to me they look like a cruder version of the people in the Grant Wood painting “American Gothic” (minus the pitchfork, of course!). 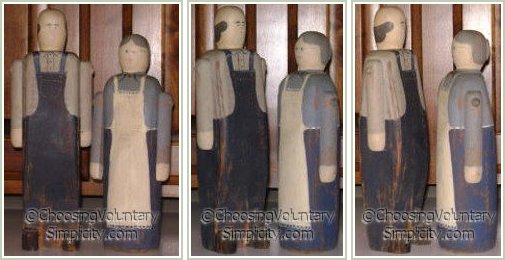 My people were each hand-carved from solid blocks of wood, with rounded straight arm pieces that were carved separately and attached with wooden pegs. Their facial expressions are serious but not as somber as in the famous painting. The paint is worn and faded but still shows the little details. The Mister wears bib overalls with a red handkerchief in his back pocket, has tiny buttons down his shirt front and heavy boots with lacings. The Missus has round wire glasses and wears her hair parted in the center and gathered into a tight carved bun. Her long dress has a pointed collar and buttons, and she wears a cameo brooch and an apron trimmed with lace. Somehow the very crudeness of the carving and painting is what gives these figures such “personality.”

They always make me want to smile.

Peace Amid the Storm

I love to walk into a room and see a piece of whimsy. It tells me a lot about the person I am visiting.

These figures make me smile, too. Thanks!

I love your Mister and Missus. I have three tribal figurines – two of which used to belong to my grandfather. The reason I love them is that they are so completely different than anything else he ever had – he was Italian and everything he had other than these figurines was more gilted and heavy.

Sometimes simple is most beautiful.

I love those! I used to have a set of stuffed little rabbits, very similar to your people, only cloth. They had very simple handstitched faces. I adored those, had them for many years.