Finally… Some Streaked and Speckled Seedlings from My Revolution Hostas 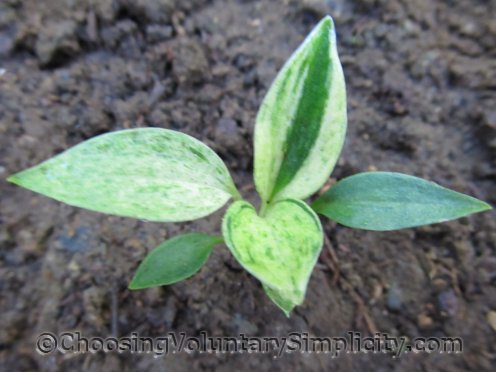 Until this year, none of my Revolution hostas have ever produced streaked or speckled seedlings. They always had lots and lots of seed pods, and even many seed pods that were brightly striped… but all the Revolution seeds I have planted over the years have always resulted only in seedlings that were a solid dark green. 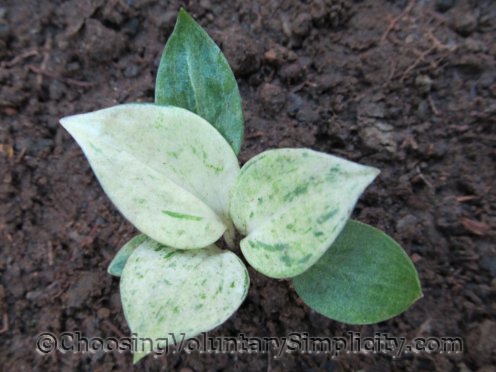 I carefully watched one particular seed pod as it developed all last summer because this one had especially vibrant colors. The red was redder and the green was brighter… a striking contrast against the cream-colored background of the pod. I tried to convince myself that I didn’t really need any more hosta seedlings, but… 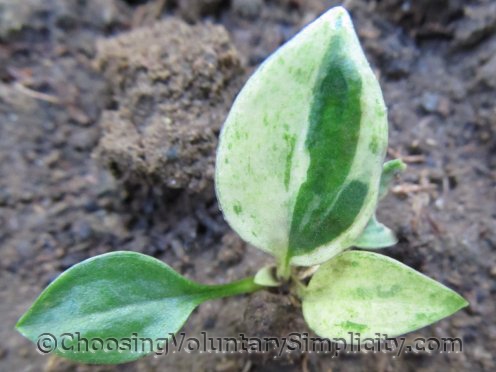 I did manage to show some restraint, though, because this was the only seed pod I collected last year. In late February I planted “just a few” seeds using my usual methods for growing hosta seedlings inside under lights. Much to my surprise, ALL the seedlings had creamy white leaves and at least a few green streaks or green speckles. They all looked promising for a couple of weeks, but the seedlings with the most white didn’t survive past the formation of their second or third leaves. 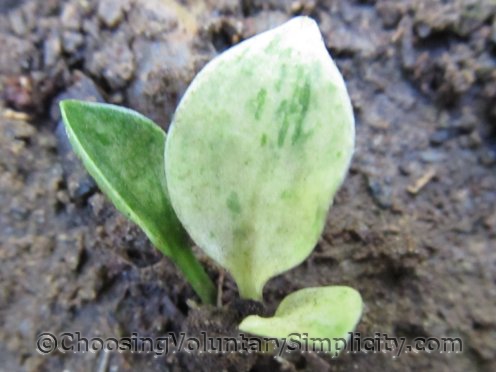 But that still left seven obviously healthy and thriving tiny hostas… although I have never had hosta seedlings grow so slowly. Even now, at the age of six months, these seven seedlings are still incredibly small… the largest of these measures only 2 1/4 inches wide leaf to leaf… the smallest one still has only three leaves and measures only 1 1/4 inches across. Most have three or four leaves… a couple have six leaves.

All of the little Revolution hostas still have creamy white leaves and streaks or speckles, but as you can see in the photographs, they all have now also grown at least one very green leaf. Is this an indication that they will lose their white leaves and their streaks and their speckles… and emerge as all green hostas next spring?

Impressive looking seedlings. I never knew you could grow hostas from seeds until I started reading this blog. I sent and got some seeds and will try my luck in a few months. I’m looking forward to seeing what I get.

You inspire me to keep trying. I too have had no luck with revolution seeds, all green or white that died, but after seeing these lovely beauties I have to try again.