We have an astonishing number of “volunteer” foxgloves this year. Since these foxgloves are biennials, I guess I’ll have to admit that somebody… and that somebody would be me… must have missed more than a few foxglove seed pods over the years. I really thought I was removing them all, but the evidence is against me. I still wonder, though, how foxglove seeds can travel such a long distance.

Most of the volunteer foxglove clumps are growing at the other end of our property, where we have never grown foxgloves before. They’re growing in an area we intended to mow, but when we discovered all the foxgloves growing there this spring and realized that the plants were already old enough to blossom this year, we decided to leave the area unmowed and just let the foxgloves do their thing. That large mass of dozens and dozens (and dozens and dozens) of foxgloves flowering all at once has been really beautiful.

I think I’ve already lost the battle, but I haven’t decided yet… do I want to let all of these foxgloves reseed or try to gain back some control of that area? Obviously if I don’t start removing seed pods soon, there will be an absolute jungle of foxglove plants out there in the years ahead!

But that isn’t the reason for this post. A few days ago I noticed that one of the foxgloves has an unusual number of flower stalks… actually, there are more than sixteen stalks on just this one plant. The main flower stalk is taller than the others and obviously has been blossoming for some time, because it now has mostly green seed pods and only a few blossoms left at the very top of the stalk. The main flower stalk looks like the rest of the foxgloves out there… but in addition to its one main “normal” stalk, there are at least fifteen more flower stalks coming out of the base of the plant, around the center stalk. 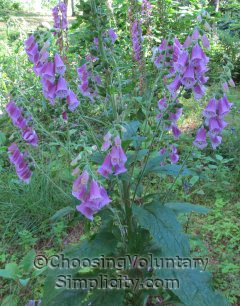 I’ve been growing foxgloves for years, both intentionally and unintentionally, and I have never seen this happen before. None of my reference books mention it either, but maybe it isn’t that unusual. I thought it was interesting, though. I wonder if seeds from this plant would result in other foxgloves with multiple stalks?

For One of Us It Is a Totally Relaxing Experience

This may be a stupid idea but I was wondering if it is possible that a deer or some other animal ate enough of this foxglove early on so it was like a pruning. Those slender stalks coming out around the large tall stalk made me think that. We do a lot of pruning of our apple trees and other plants and the growth after you prune has a similar look to those slender stalks. I just thought this was worth mentioning. What do you think?

Brad, that certainly is possible because the foxgloves are growing in an area where we see deer tracks in winter. I know what you mean about the way the extra growth looks… it does have the same look as the growth after pruning.

I wish I had your green thumb (or green hand!) I love the idea of gardening but I’m terrible at it. I bought 3 pots of foxgloves earlier this year and set them out but they aren’t doing well. I so envy your lovely gardens. They are beautiful.

I have not seen this before and like you I have been growing Foxgloves for many years. Thank you for this blog and for all of your wonderful photographs. I’m a loyal fan.

Interesting! It does resemble a plant that’s been pruned, but how then to explain that older, taller center stalk? Is the plant possibly growing in an area with an abundance of phosphate in the soil…maybe woodchips or sawdust or old rotting logs in the ground? It may be that a potential imbalance in the nutrient levels of the soil in that particular spot might ‘spur’ a bounty of blooms such as this.
It would be worthwhile to replant the seeds from this foxglove and see what develops! I’m in a similar situation with some sunflower seeds I saved from a birdseed volunteer that grew extremely well in my gravel driveway last summer. It matured as dwarf, barely 18″ tall, but perfect in form, and so ‘durable’ to grow and flower so well in nothing but 30″ of stone! The plants from those seeds are beginning to head now at about 32″, still shorter than a typical sunflower, and have sturdy thick stems, unlike most black oil seeds. It is fun to discover a new variety based in your own unique experience.
Thanks so much for this site. I enjoy it frequently and admire your photography. Happy gardening!

Pat, that’s an interesting thought. I’m sure there are wood chips, sawdust, AND old rotting logs in that ground, because until recently it has always been a wooded area. Yesterday when we were cutting the stalks we actually found another similar foxglove not too far away from the first one, but this one had only four surrounding flower stalks.

Thank you, and good luck with your sunflowers!

How beautiful! I do wish foxgloves were more prolific in my area. They will grow, but sometimes the heat gets them before the seedpods develop.